Sunday morning. I woke up early, already around 5:30 AM. Went downstairs to grab some breakfast and do final planning for my last day in Bangkok. Big on my list for today, before taking the night train to Butterworth:

Sure enough, Dao, my host, was already awake, happily singing, as she always does. Actually, all she seems to do all day is either sing or talk on the phone. Sometimes she even sings while talking to on the phone. Hehe. 😀

After a short stop at 7eleven, armed with a bottle of cold water I started walking towards Chatuchak market. But… by the time I reached Democracy monument roundabout (just a few hundred meters away 😀), I realized that the day was a bit too hot for what I had in mind. I mean, I do love this weather but… this is too much of a good thing.

After my recent TukTuk experience I considered myself to be a seasoned tuktuk customer, so I decided to hail a TukTuk which will get me straight to Chatuchak market. As it was Sunday early morning, the streets around Democracy monument were quite empty and unusually calm. Practically no cars and no TukTuks around. But, believe it or not, the moment I thought of it, a TukTuk with a passenger (local guy) in the back seat appeared in front of me, slowing down. The passenger jumped out from the back seat and immediately asked: “Where are you going?”

Yeah, right. I had this already… “Ok, ok, but how much TukTuk to Chatuchak?” I insisted.

“No, no, weekend market closed” said the local guy while jumping back on the TukTuk.

Finally he replied: “Two hundred” as his TukTuk was driving away…

“Two hundred baht? WTF?! Good that he didn’t say 500 baht. No way TukTuk costs 200 baht from here to Chatuchak… I’ll have to ask someone else…”

So I continued walking down the street and aproached the first person I found: “Good morning sir, can you please help me?” And I quickly continued before he could answer anything: “How much would a TukTuk cost from here to Chatuchak market?” (I figured that any random pedestrian on a sunny Sunday morning would know this off the top of their head… 😀)

He looked at me and just said “Chatuchak, mmmh”. Then he lowerd his head and stared at his feet for a few moments. These few moments seemed like eternity. Suddenly, he raised his head and with a proud look in his eyes -as if he rememered something really important- he said: “10 kilometers!”

Now, if this were a scene from a comic book in which I was one of the characters, I would probably have had three big question marks above my head in that scene. I guess he realised this, so he added: “200 baht. Better take a bus.”

Hm… Bus. Yeah buddy, good idea. BTW, this was also on my to-do list – jump on a local bus from anywhere to anywhere in Bangkok, just to feel the vibe.

“Ok, thanks, man! Thank you so much! Have a nice day!” With those words I parted with the nice guy and continued towards the big boulevard on the way to Chatuchak market. (that’s where I hoped to find the bus stop).

After wandering around in the hot sun, finally I found a bus stop. Whoooo-ha! Chatuchak, here I come! But, wait… how do I know which bus to take? 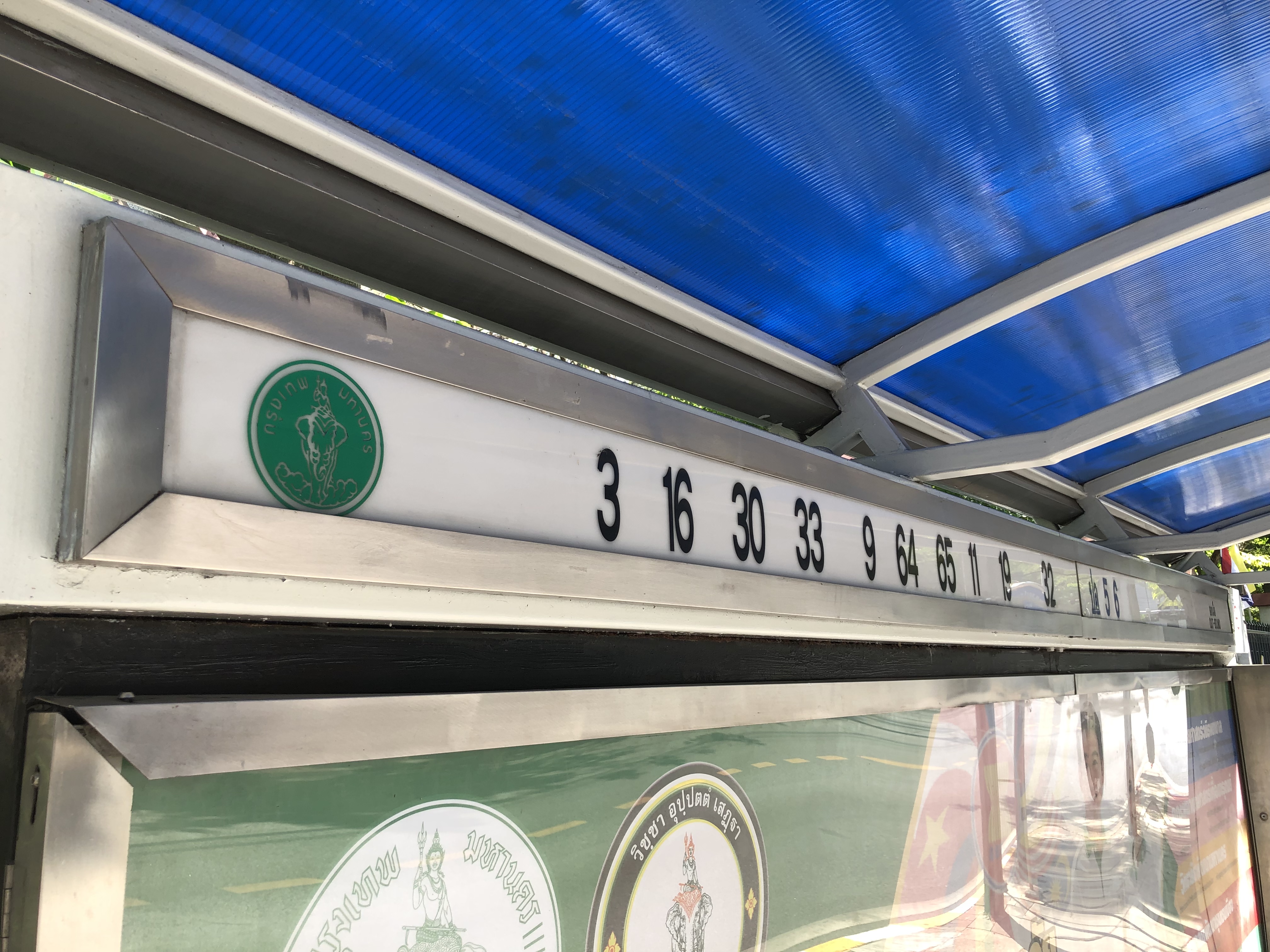 I couldn’t ask Google because I had no Internet connection, so I asked the only person around – a senior who was sitting there and waiting for the bus. And as the old dude was not 100% sure, he consulted the street cleaning lady, who happened to be passing by just then. And after a short conversation, they both agreed that I should take bus No.16, on the opposite side of the street. “Thank you so much”, I said to both of them and ran accross the street to catch my bus.

In Bangkok, busses normally slow down a bit when approaching bus stops and people then give a hand signal to the driver that they want to get on the bus. Otherwise the bus just drives by without stopping.

I was the only one waiting at this bus stop, so I waived at the bus driver when I saw No.16 approaching. Bus stopped. Door opened. I got on the bus.

Bangkok’s city busses always have a driver and a conductor. When the conductor lady came to sell me the ticket, I asked while handing over 20 baht to her: “Chatuchak market?” And I saw immediately in her face that No.16 was not headed towards Chatuchak market. She took the 20 baht, but didn’t give me any ticket. Instead, she sat in an empty seat just in front of me and showed me with the hand to stay where I was. “Oki doki” I thought. And I sat there looking through the window, filming and taking photos of my very first bus ride in Bangkok (the one from the airport to Khao San Rd. doesn’t count :-). The first time is always exciting.

After 20 minutes waiting time it seemed that all other busses except No.3 were coming and going… And then, bus No. 524 stopped even without me waiving. The doors opened and an old lady stood there shouting: “Chatuchak market, Chatuchak market!” Very cool! Immidiately I forgot the bus No. 3 and boarded this one. The bus ticket costs only 15 baht, BTW!

After ca. 30 min., No. 524 stopped in front of the BTS/MRT Mo Chit station entrance. The old lady conductor pointed towards the market entrance: “Go there.” 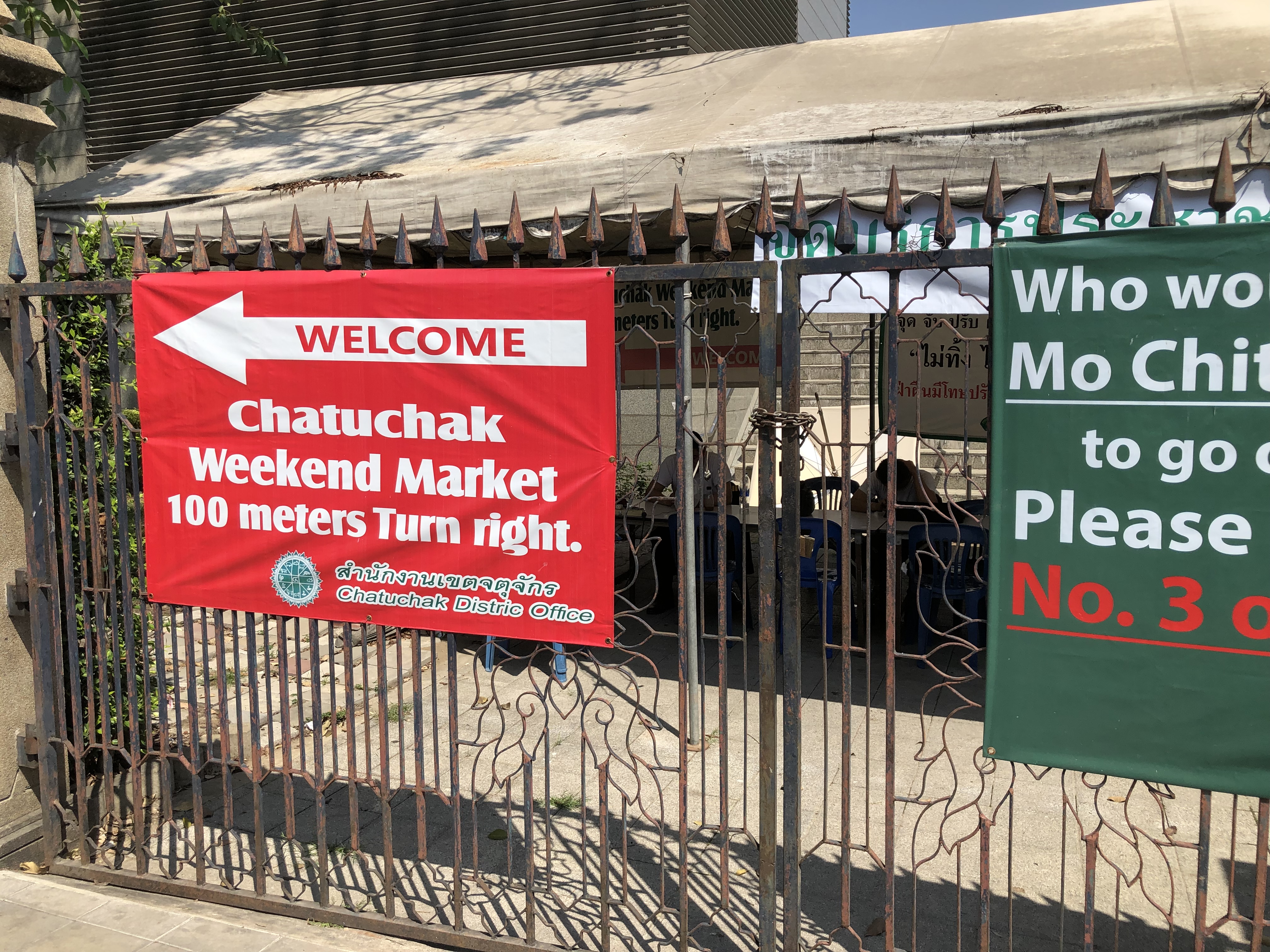 Not sure what this market is so famous for, tho’. Clothing, souvenirs, handycraft, tea… everything and anything immaginable can be obtained there. But, honestly, neither the choice is bigger nor the prices are lower than in the city and it pays visiting only if you wish to see the largest market in Asia! And, as far haggling is concerned… forget it. Nobody’s going to haggle with you if you’re buying any of the stuff in usual quantities… (or at least not seriously haggle).